Welcome to our  Virtual Art Gallery!   Join us every other month, starting January 2021, as the Village of Palmetto Bay and ArtSouth showcase some of the most talented artists in our community via a virtual art gallery, which will be live-streamed on our Facebook page. If you are interested in purchasing artwork from the featured artist, please click below to access and complete the online Art Buyer Interest Form. 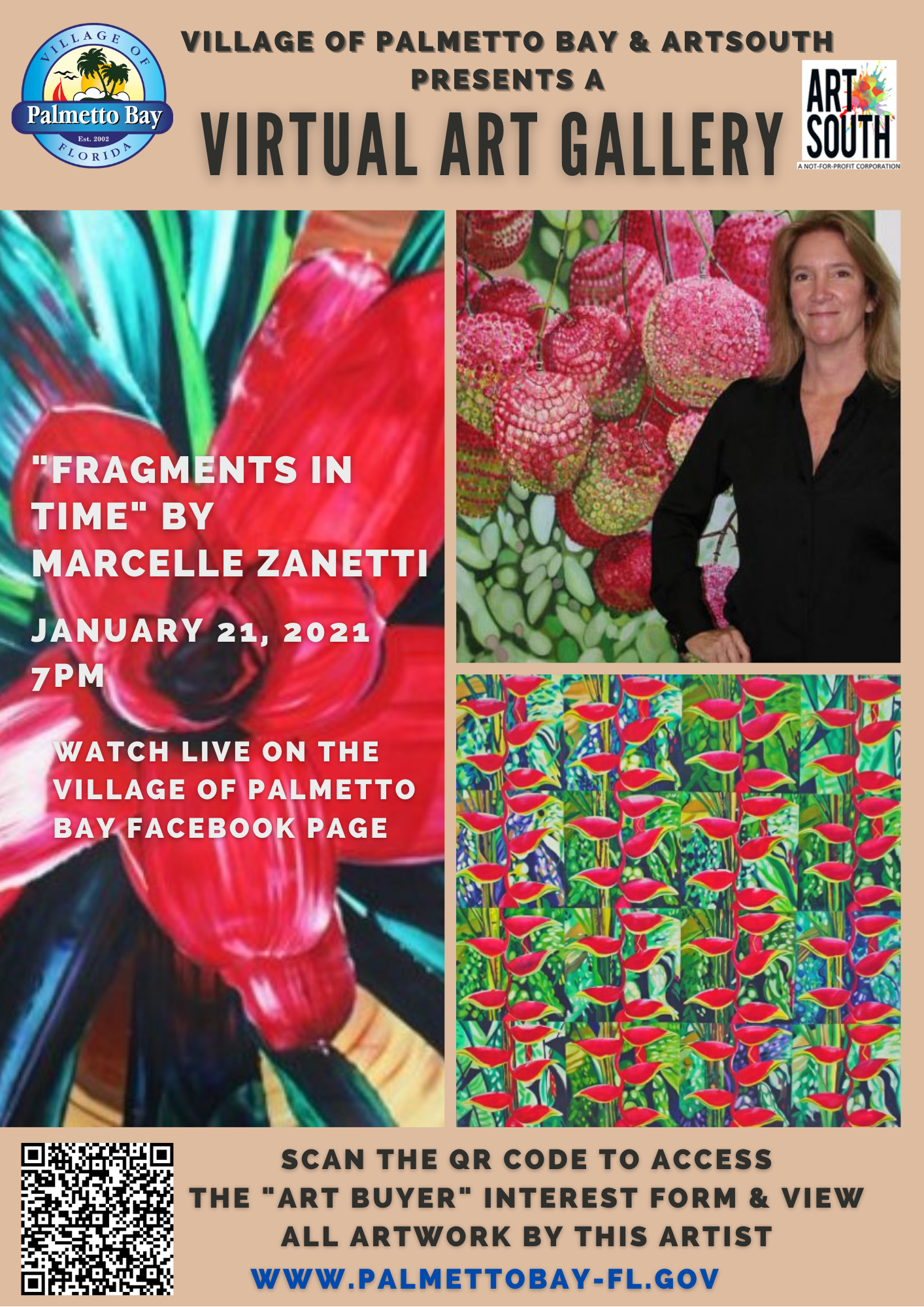 About the Artist - Marcelle Zanetti

Marcelle Zanetti was born in Massachusetts, educated at University of Massachusetts and Southern Connecticut State University where she received degrees in painting and art education.

Moving to Stuart, Florida in 1981 Zanetti opened her first studio. In 1983 her first major painting exhibit was described as “A Botanist Dream" by Kenneth Crawford, Arts Director of the Martin County News. “Marcelle sees the natural world with a passion for detail that begins in the compositions of her paintings and extends outward in all directions. The artist roams the mangrove swamps, savannas, pinewood and sand flats locally to photograph and watch for the visual event that gives her inspiration to paint. “

That same year, well-known gallerist, Bruce Helander saw Zanetti ‘s work and began to exhibit it regularly at his prestigious Worth Avenue Gallery in Palm Beach. Soon the Palm Beach Post splashed a full-page photograph of one of her paintings on the front cover of the Weekend Section.

The next few years saw Zanetti’s paintings at the Florida State Capital in Tallahassee, The Society of the Four Arts, the South Florida Science Museum, Barbra Gilman Gallery and A.E. Backus Gallery and Museum in Fort Pierce. Art galleries from Key West to Atlanta, Sao Paulo Brazil to Washington, DC have represented Zanetti.

Various events have requested Zanetti ‘s paintings including many museums and galleries. DreamWorks motion pictures rented a painting of a large Bismarck Palm which was featured in the film “Red Eye “. Designer Todd Oldham introduced his latest furniture line at Details in Miami Beach where the collection was surrounded with Zanetti ‘s paintings. Florida Design Magazine featured another painting in its cover story “A Key West Vacation Home “. When the new Adrienne Arsht Center for the Performing Arts opened and held a special event honoring its benefactors, the building was transformed with Zanetti’s work. Curated shows include University of Tampa, Scarfone – Hartley Gallery, Florida International University, Glenn Herbert Library, Jacksonville University, Miami Museum of Contemporary

Art, Fort Lauderdale Museum of Art and Naples Philharmonic Museum where Zanetti’s large-scale paintings were hanging with those of Rosenquist, Rauschenberg and Olitski. Represented by some of the finest Galleries in the country, her work is widely collected by both private corporate clients. Included in this vast array are Tropicana, United Services Automobile Association, Hava-Tampa Cigars, the Blake Library in Stuart, Bank of America, Hyatt Regency Resorts, Hilton Hotels, Disney World Resorts, Marriott Hotels, the Polo Club of Boca Raton, The Ocean Club in Key Biscayne, Jupiter Medical Center and Morgan Stanley Dean Witter.

Zanetti has been painting for more than 30 years. She has managed an art gallery in Wynwood as well as owned a gallery and studio in Palmetto Bay. She has lived in several locations in Florida and presently keeps a studio in Miami. She also teaches painting at Fairchild Tropical Botanic Garden in Coral Gables.

Current exhibitions and special events where her work can be viewed include Michael Murphy Gallery in Tampa, the Village of Palmetto Bay Government Offices, Chandler Gallery in Jupiter, and Embraer Executive Jets in Melbourne.