About the FPL Franchise Fees

Florida Power & Light (FPL) franchise fees have been part of the Palmetto Bay consumer's electric bill since before incorporation. The fee is based on a percentage of the total bill. Prior to 2019, the percentage was 6%. The figure was part of a Franchise Fee Agreement between FPL and Miami-Dade County, which was already in place at the time of incorporation. Franchise agreements allow FPL the use of public rights-of-way to maintain and improve the electric grid.

Following the expiration of the county's agreement with FPL in 2019, the Village of Palmetto Bay entered into a new Franchise Fee Agreement with FPL and lowered the percentage to 3.5%, thereby reducing revenues to the Village. Those revenues are allocated to deliver services to residents for parks and streets maintenance, police services, special events and programs, and more. The new agreement also included a sunset provision.

During its Regular Council Meeting on April 5, 2021, the Village Council considered and adopted an ordinance to amend the current franchise agreement with FPL. The ordinance revises two existing provisions of the agreement:

Other municipalities with similar agreements have maintained the 6% figure, including Pinecrest and Cutler Bay. As explained by Village Manager Nick Marano, a benchmark customer who consumes 1,000 kilowatt hours per month pays about $100 to FPL. At the 3.5% rate, the customer pays $3.50 into the franchise fee, which amounts to $42 annually. With the rate returning to its original figure of 6%, the customer would pay an additional $2.50 per month or $30 per year. The difference translates into $800,000 in additional annual revenue to the Village to pay for services directly delivered to Palmetto Bay residents.

FPL franchise fees account for 5% of our operating (General Fund) revenues, estimated at $850,000 annually. Revenues from other sources including Communications Service Taxes, Sales Taxes and Park Rentals are significantly lower than in years past. Revenues from the Communications Service Tax have decreased from $1,326,445 in 2015 to $857,721 in 2020, and another decrease is expected for 2021. Revenues from this source are expected to essentially go away as more folks rely on mobile devices leaving behind the days of the land line. Sales Tax and Park Rental revenues have also recently dipped largely as a result of the COVID-19 pandemic. Although increases in those sources is anticipated in the future, the full recovery will be slow to come. Finally, ad-valorem or property taxes have been essentially flat and although some growth is projected for the coming year, the increase will not be sufficient to plug in the hole caused by steadily decreasing revenues.

Presently, police represents our largest expenditure at 53% , followed by parks at 15%. The remaining 32% is divided between eight departments plus General Government. In 2016, Palmetto Bay had 57 approved full-time employees. Five years later in 2021, the number is 59. The fluctuation in personnel has been minimal. Therefore, the fiscal challenge is not the result of increasing personnel. 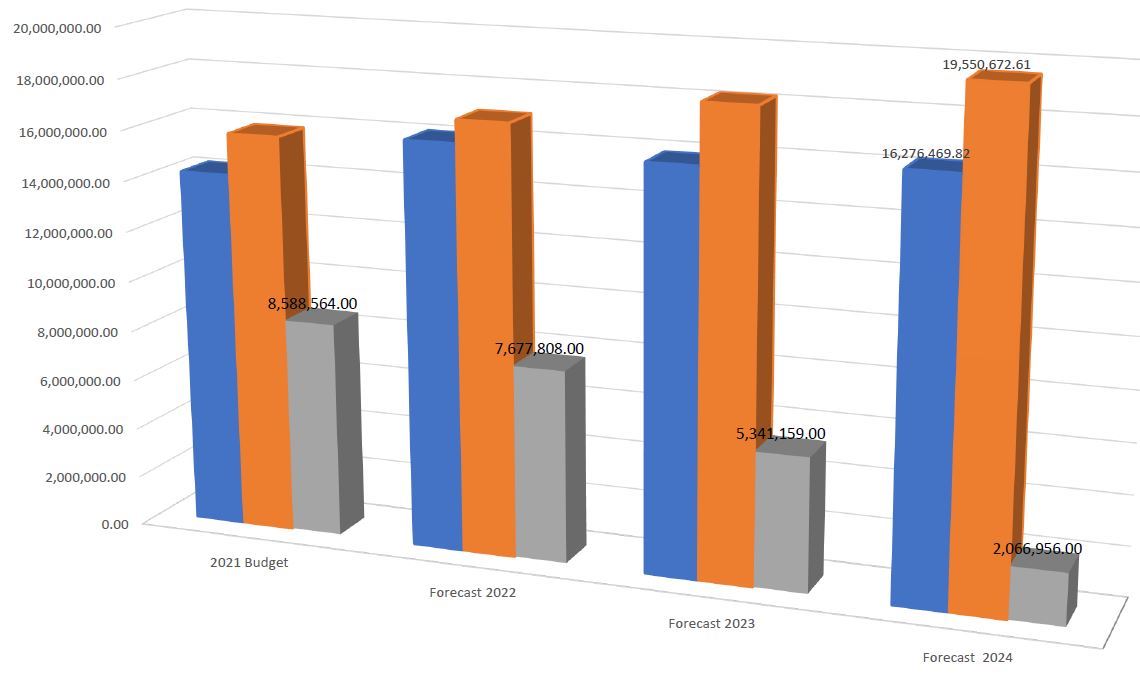 Manager Marano also explained the anticipated ARPA federal funding slated for the Village. Palmetto Bay qualifies for up to $10.3 million and approximately $1.8 million may be used to replace revenue shortfalls and replenish reserves. However, this represents a one-time opportunity which means that it only extends the time until Palmetto Bay will be in the red again.

The franchise fee rate reduction coupled with the fiscal impact of the unprecedented COVID-19 pandemic significantly hindered the Village. The Village is responsible for providing services to residents while ensuring that it remains fiscally healthy especially to effectively response to any potential unexpected circumstance.