Palmetto Bay is turning 20, and what a fulfilling time it has been! 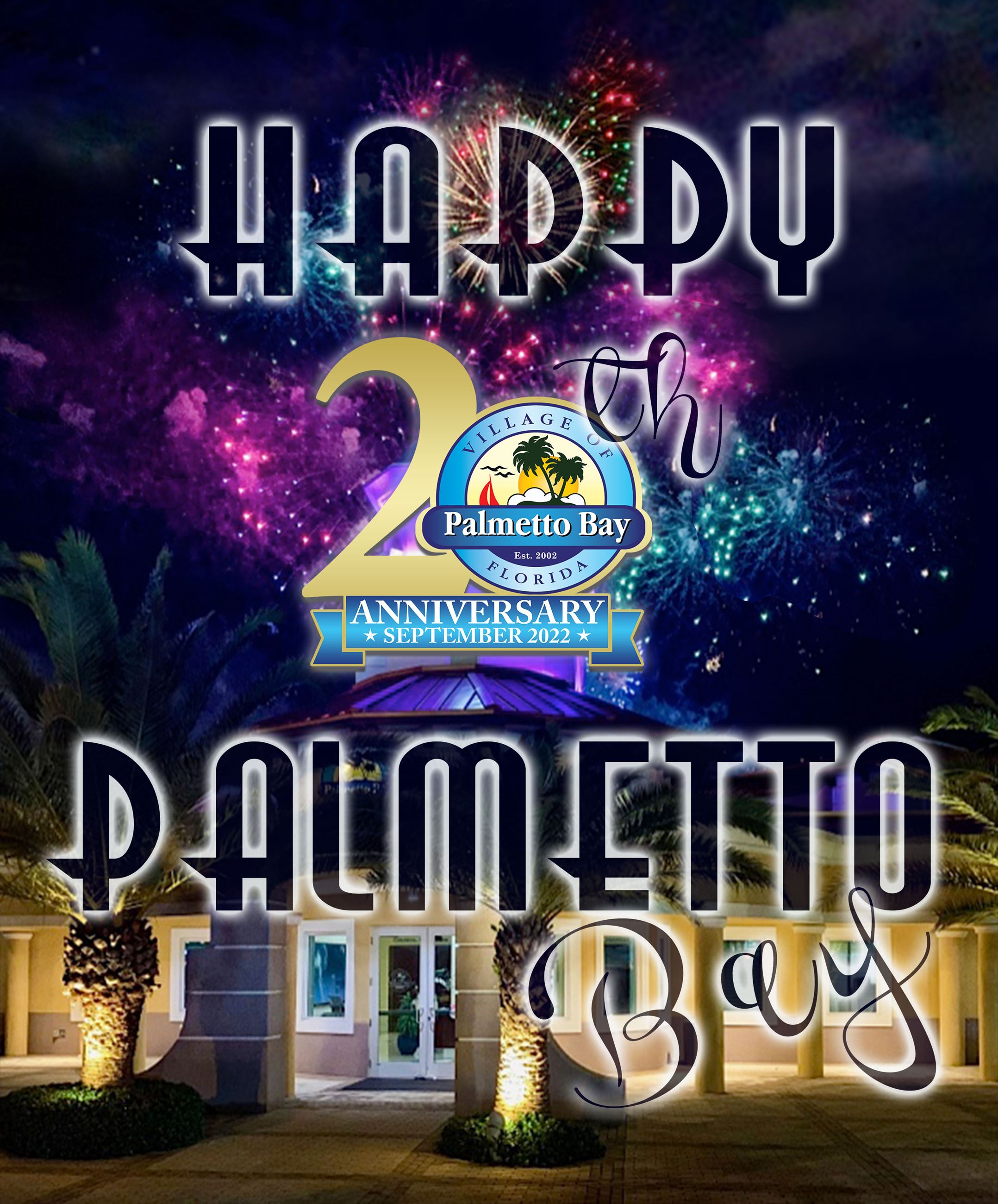 Palmetto Bay is turning the BIG 20! Can you believe it, two decades of history!

We’ve come a long way since incorporation, from mobile apps to electric vehicles, from newly improved parks to newly improved roads, from televised meetings to virtual programs, and so much more!

Over the past 20 years, the Village of Palmetto Bay has positioned itself to be one of the most successful cities in South Florida and much has to do with the work that Village officials and residents have put in for two decades to make it an exceptional community to live, work, play and learn!

The Village of Palmetto Bay is truly an inviting village of lushly landscaped streets and beautiful homes.  It is not uncommon to see folks taking advantage of the beautiful sites by strolling around, exercising, or simply walking their canine friends.  Neighbors know one another and happily gather at the many Village events to share time together.  Aside from its natural beauty, Palmetto Bay is known for the warmth and care of its people, and it is often described as a close-knit, family-friendly community.  This assessment is quite appropriate of a village that thrives on putting its residents first.  We exist because of our residents, and we work for our residents!

Community safety continues to be our number 1 priority as evidenced in our crime rate, which continues to be among the lowest in the entire county.  Palmetto Bay has outsourced its policing services to Miami-Dade County.  From the onset, the Village has maintained a collaborative agreement with the Miami-Dade County Police Department whereby Miami-Dade officers are specifically assigned to Palmetto Bay and the Village reimburses the county for accrued expenses.  As a result, the Village has access to other specialized law enforcement services provided by the county, which would otherwise not be available to the Village, such as special crime units.

Our parks and public areas are probably the ones with the most notable changes since Palmetto Bay’s incorporation.  We expanded our initial three-park system to include two additional facilities and are currently working on another.  Starting with the transformation of Coral Reef Park, Palmetto Bay Park and Perrine Wayside Park, followed by the addition and complete renovation of Thalatta Estate Park and Ludovici Park.  Not to mention the addition of a public library and now a new passive park to commemorate our Veterans.  Our uniquely designed street signs and our beautifully landscaped traffic circles and other traffic calming features add beauty and serenity to our public spaces while slowing down neighborhood traffic.  We still hold the title of “Tree City USA,” a designation that is bestowed upon cities with extensive tree canopies and a strong commitment to planting new trees in the public right-of-way.  We are also known as “Play City USA.”  Another designation in recognition of the great work we do in Parks and Recreation.

Palmetto Bay has also come a long way with respect to regulations.  Incorporation gave Palmetto Bay’s elected officials the ability to set policy, establish user fees, identify priorities, and approve zoning regulations.  Decisions affecting Palmetto Bay that were previously made at the county level in a building in Downtown Miami, are now locally decided by Palmetto Bay-elected Councilmembers.  In 2002, Palmetto Bay embarked on creating its own Building & Planning Department, which was initially outsourced but was fully brought in-house in 2007 as the Village sought for full flexibility in staffing requirements and control over departmental regulations.  Our Building Department today has become one of the top county-wide as rated by the International Organization for Standardization.   The Planning Division has also been recognized in the past for its work on the Downtown Palmetto Bay Code.

As elected officials, the Village Council is charged with the responsibility to identify strategies that benefit the community.  The Resident-Council communication flows in both directions.  The Council looks for feedback from the residents through outreach and through resident-focused advisory committees that provide meaningful recommendations to the Council.  Residents receive information through various methods that include regular electronic communications, updated postings on the Village website, social media, and our own television station.  Additionally, we recently leaped into the 21st century with the addition of our two latest apps, “Palmetto Bay Connect” and “Street by Street.”  The “Palmetto Bay Connect” app allows the Village to communicate important information to the registered residents.  Announcements and alerts, such as road closures and police activity go directly to the registered user’s mobile device by text or email depending on the user’s preferred method.  The “Street by Street” app allows any resident to report any issue of concern to the Village using their cell phone.  Initially, they can report the concern and take pictures to show conditions.  Once the concern has been received, the resident can track its progress through the app and can remain in constant communication with a member of the Village team.  These two innovative forms of communication allows for the village to communicate with residents in real time and vice versa and speaks to our commitment for transparency and resident engagement.

Speaking of engagement, Palmetto Bay also recently launched its very first community-wide survey to gauge how we are performing in the eyes of our residents.  The survey also serves as a planning document as the Village updates its Parks Master Plan and Comprehensive Plan.  In addition, Palmetto Bay has also developed a secure way to implement a hybrid meeting system which allows for residents to participate in Council meetings in person at Village Hall, or right from the comfort of their home or office.  As a result, more folks are able to participate in the governmental process.

Our past has been bright, but our future will be brighter.  We look to the next chapter with great enthusiasm and a new set of priorities coming from your elected leaders.  While incorporating was no easy task and in fact took a lot of time and effort from many exemplary volunteers, we have become a premier community in South Florida as a result.

Looking back, it is hard to imagine that it has now been two decades since Palmetto Bay voters agreed to create the Village of Palmetto Bay, making it possible for the once-unincorporated area to become the 33rd incorporated municipality in Miami-Dade County.

As we celebrate our 20 years, we reminisce on the process that brought us to where we are today; a vibrant residential community with even better times to come. And, at the risk of sounding pretentious, we also bask in the glory of our successes so far.